Vision of Adventure began life under the name Spirit of Adventure. This was the title of a project at the Bendrigg Trust. Jill Corso, a long-serving outdoor instructor there, created it because she believed individual disabled adults should have opportunities for access to adventurous activities at all levels.

She started it with a letter in 2010 to Trevor Clarke, then Principal of the Bendrigg Trust.

This document is an outline proposal for a scheme that I would like you to consider. Its something I feel  strongly  about, I have always loved the idea of expeditioning and journeys. I am lucky enough to have been to some fantastic places and to have felt the huge achievement of the “prize” at the end of a journey that has involved effort, teamwork and usually some hardship and moments of wishing I was somewhere else! I would like to be able to offer that opportunity to disabled people.

What do I want to do?

To enable people with special needs to participate in adventurous outdoor pursuits at a higher level than ‘the introductory or taster session’. 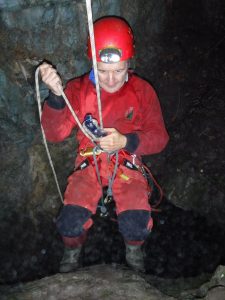 To enable them to learn skills and become as independent as possible in their chosen activity.

To enable them to participate in adventurous journeys and expeditions.

To give them a goal to strive towards, train for, raise funds for and plan over a period of several months. Culminating in the event and the huge feelings of achievement that come with something you have worked hard for.

Through my many years of working with Bendrigg and other disability organisations I have always felt that there is a gap. There is very little provision for people with special needs to access adventurous outdoor pursuits at a level other than the introductory or taster session.

Fortunately, Trevor Clarke was very supportive and Spirit of Adventure was created. 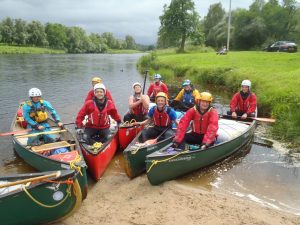 The first courses took place the following year. Courses were open to participants with all types of disability. In 2012 Steve Bateman, who is visually impaired, participated on a mixed-disability canoeing expedition down the River Wye. He wanted to do more and so returned the following year to paddle the River Spey. But this time he also brought with him four other visually impaired paddlers and five sighted guides.

From there, word spread within the visually impaired community and participation grew over the following years. By 2018 the project was focused almost solely on visually impaired participants. Around 50 visually impaired adults were regularly taking part in canoeing, climbing, caving and cycling. We had branched out into triathlon with some great successes. All the activities were supported by pool of around 50 volunteer sighted guides.

In September 2018 Bendrigg announced they were unable to continue with the Spirit of Adventure work and the project would close.

Believing the project too valuable to lose, Jill and her husband Dave, with the support of previous participants and volunteers, decided to form a new charity. It would concentrate solely on visually impaired adults. Its name Vision of Adventure was chosen by the participants.

Vision of Adventure was registered by the charity commission in October 2018.

All of the early players are still involved, Trevor Clarke MBE is patron of Vision of Adventure and Steve Bateman, the first VI, is a trustee.

Over the first few months an intense period of behind the scenes activity allowed a programme of courses to be put together for the following summer. And in 2019 a total of 11 courses were run, all fully subscribed.  We also supported participation by VI’s at cycle sportives and triathlon events.

Numbers participating grew to 63 VI’s supported by 68 volunteer guides. Some of the years highlights included an Open water swimming course on Derwent Water and canoe trip down the River Spey to the sea.

Our participation at the British Para Triathlon Championship was particularly successful. A fantastic day saw focused training by VoA athletes paying off as our ladies swept the board taking gold, silver and bronze in the VI female class. Standards were extremely high in the male race, our men put up a good show against an elite field. We also had the oldest finisher with an amazing effort from one of our VI ladies who only took up triathlon in her sixties and had to work really hard learning to swim.

We also took a team to the London to Brighton cycle ride in September, It was an epic day with 12 tandems (24 cyclists) making the 55 mile journey from Clapham Common in London to the sea front in Brighton. Everyone found it challenging, for many of the visually impaired cyclists and for several of the guides it was the furthest they had ever cycled. A total of over £6000 was raised by the team – a great effort.

In 2020 we are hoping to run another packed programme with more courses than ever before! 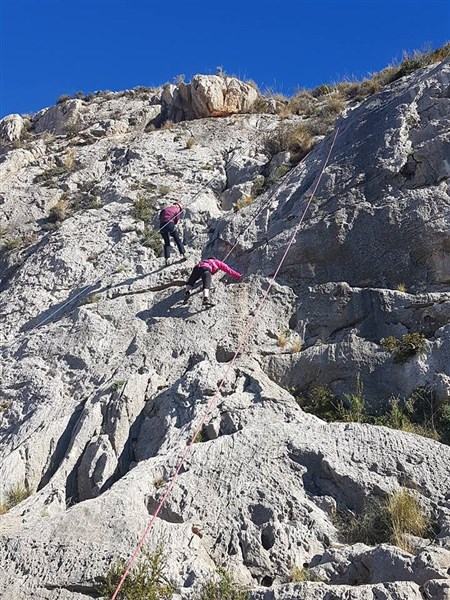